A-G releases huge list of prosecution witnesses, including who’s who of PM’s associates, rivals, security chiefs, and numerous names not widely known to be linked to investigation.

Attorney General Avichai Mandelblit on Monday published a list of 333 prosecution witnesses in the state’s case against Prime Minister Benjamin Netanyahu, including a veritable who’s who of Netanyahu associates and confidants, Israeli security chiefs, politicians and journalists, and numerous names not previously known to have been associated with the case.

The list (which begins on page 45 of the Hebrew indictment) includes wealthy friends and patrons of Netanyahu over the years such as Sheldon and Miriam Adelson; Ron Lauder; the two men involved in the so-called Case 1000 probe, Arnon Milchan and James Packer; and Netanyahu’s cousin and financial supporter Nathan Milikowsky, all of whom were known to have given witness testimony in the course of the investigations into the prime minister.

Also named among the witnesses are many of Netanyahu’s top advisers over the years, such as Ambassador to the United States Ron Dermer, Perach Lerner, David Shimron, David Sharan, and Ran Baratz. Nir Hefetz, Shlomo Filber and Avi Harow, state’s witnesses in the case, are also listed. 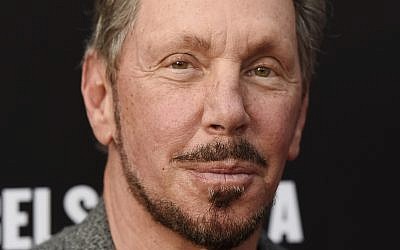 Also on the list are prominent individuals not previously widely recognized to have been relevant to the case, including businessmen Len Blavatnik and Oracle Corporation’s Larry Ellison.

It is understood that those on the list have either been questioned as witnesses in the course of the investigations, or asked to give a statement to investigators, and that they would have been told that they are potential witnesses in any subsequent trial and/or that that their evidence may be used in any trial.

Mandelblit published the list of prosecution witnesses as part of an indictment that he resubmitted on Monday to Knesset Speaker Yuli Edlestein. Mandeblit on November 21 formally issued charges against Netanyahu, and informed the Knesset Speaker of those charges that same day. But on Monday, he added the witness list and specified that the trial would take place in Jerusalem District Court. 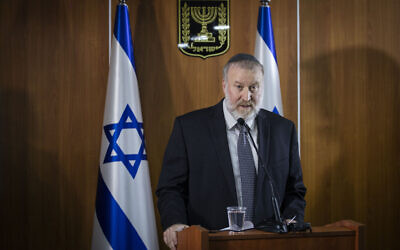 Attorney General Avichai Mandelblit holds a press conference at the Ministry of Justice in Jerusalem, announcing his decision that Prime Minister Benjamin Netanyahu will stand trial for bribery, fraud and breach of trust in three corruption cases November 21, 2019. (Hadas Parush/FLASH90)

In a statement, he added that he was now giving Netanyahu 30 days to decide whether he will seek Knesset immunity from prosecution. That 30 day-period was believed to have begun on November 22, but Mandelblit said he was restarting the clock now that he was resubmitting the indictment. Mandelblit cannot formally file the charges with the court until the immunity issue is resolved. The fact that the Knesset House Committee — which handles immunity matters — is not currently functioning because of Israel’s political deadlock complicates the process, and may delay the filing of charges by months.

In Case 1000, involving accusations that Netanyahu received gifts and benefits from billionaire benefactors including Israeli-born Hollywood producer Milchan in exchange for favors, Mandelblit charged Netanyahu with fraud and breach of trust — the latter being a somewhat murkily defined offense relating to an official violating the trust the public has placed in him. Milchan is not to be charged. In Case 2000, involving accusations Netanyahu agreed with Yedioth Ahronoth newspaper publisher Arnon Mozes to weaken the circulation of a rival daily owned by the Adelsons in return for more favorable coverage from Yedioth, Mandelblit charged the premier with fraud and breach of trust, while Mozes is charged with bribery.

In Case 4000, widely seen as the most serious against the premier, Netanyahu is accused of having advanced regulatory decisions that benefited Shaul Elovitch, the controlling shareholder in the Bezeq telecom giant, in exchange for positive coverage from the Elovitch-owned Walla news site. In that case Mandelblit has charged Netanyahu and Elovitch with bribery, and Netanyahu with fraud and breach of trust as well.

Netanyahu denies any wrongdoing and has claimed he is the victim of an attempted coup. He said on November 21 that he would not resign but would, rather, continue to lead Israel “in accordance with the law.”