Al-Qaeda-linked group attacks Camp Simba, a base used by US and Kenyan military personnel, in Lamu County.

Al-Shabab fighters have attacked a military base in Kenya’s Lamu County used by US and Kenyan military personnel, the East African country’s army and the armed group said.

Kenyan Defence Forces (KDF) said in a statement on Sunday that “at around 5:30am an attempt was made to breach security at Manda Air Strip.

“The attempted breach was successfully repulsed. Four terrorists’ bodies have so far been found. The airstrip is safe,” the statement added.

The US military command for Africa, AFRICOM, confirmed there had been an attack in a brief statement.

“U.S. Africa Command acknowledges there was an attack at Manda Bay Airfield, Kenya and is monitoring the situation. Al-Shabaab has claimed responsibility for the incident. As facts and details emerge, we will provide an update.”

Earlier, al-Shabab said in a statement the raid resulted in “severe casualties on both American and Kenyan troops stationed there.”

“The Mujahideen fighters covertly entered enemy lines, successfully stormed the heavily fortified military base and have now taken effective control of a part of the base,” the armed group said.

The attack sent a dark plume of smoke into the air, Abdallah Barghash, a witness, told Reuters news agency. Barghash was among the crowds watching the drama unfold on Manda Island from neighbouring Lamu Island, a top tourist destination.

Al Jazeera’s Haru Mutase, reporting from Kenyan capital, Nairobi, said it was an audacious attack by the armed group.

“The base is heavily fortified and al-Shabab still managed to break through. We are told the actual attack is over and that Kenyan and American forces are combing through the area trying to find those responsible,” Mutasa said.

“The area is near Boni forest where al-Shabab is thought to operate from. In the past, Kenyan security forces have been going in and out of that forest to try to weed out al-Shabab fighters,” she added.

Al-Shabab has maintained a campaign of deadly bomb and gun attacks despite being ejected from their bases in the Somali capital, Mogadishu, and other areas years ago. 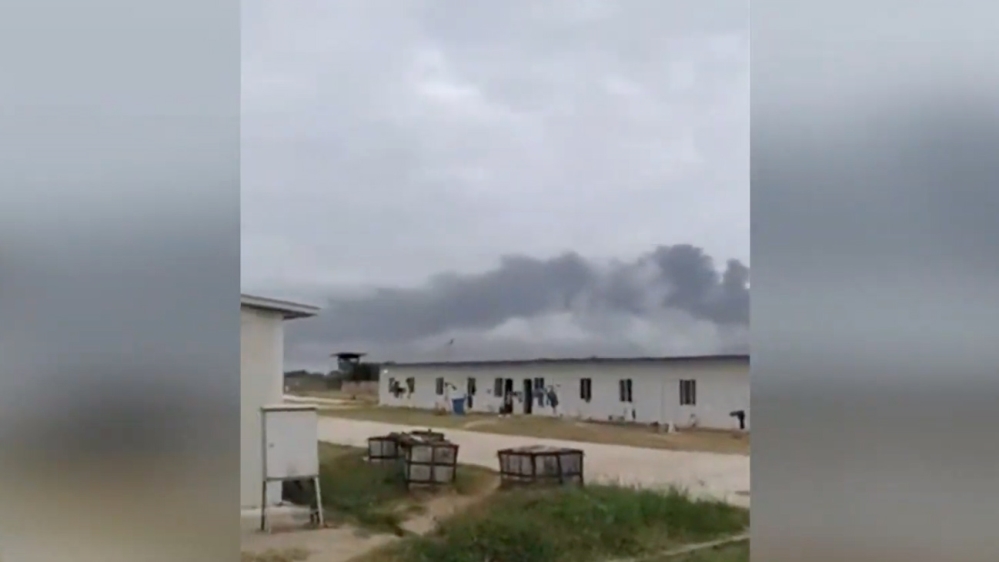 The attack sent a dark plume of smoke into the air

The group also carries out frequent attacks in neighbouring Kenya, which sent thousands of its troops into Somalia to fight al-Shabab.

This attack comes nearly a year after al-Shabab launched a deadly suicide attack on the upscale 14 Riverside complex in Nairobi, killing 21 people.

This week, they killed three passengers when they attacked a bus in Lamu County, police said.