Hailed throughout the Western corporate media as “humanitarian rescue workers”, the Syrian White Helmets have finally admitted what they really are.

Of course, the independent minded and the alternative Internet media have been saying it for a long time. The White Helmets are no more than crisis actors who were used in staged attacks, which were blamed on Syrian government forces. The object had been to stir public anger in the West against Assad and his regime to justify Western military intervention.

Fortunately that didn’t happen. The Russians intervened instead, and quickly routed the Western backed militants who operated in the guise of ISIS (otherwise known Deash or ISIL).

However, before we close the chapter on this particular episode in the War on Terror it’s worth recalling Britain’s role. Not only did Sandhurst-trained former British Army officer, James Le Mesurier, found the White Helmets, they were evacuated and relocated to Britain and Canada with the defeat of ISIS. No doubt to prevent them falling into the hands of Syrian government forces and disclosing the extent of Western support for themselves and ISIS.

The White Helemts and ISIS (ISIL or Daesh) were simply two sides of the same coin, minted by the West to help oust Assad. 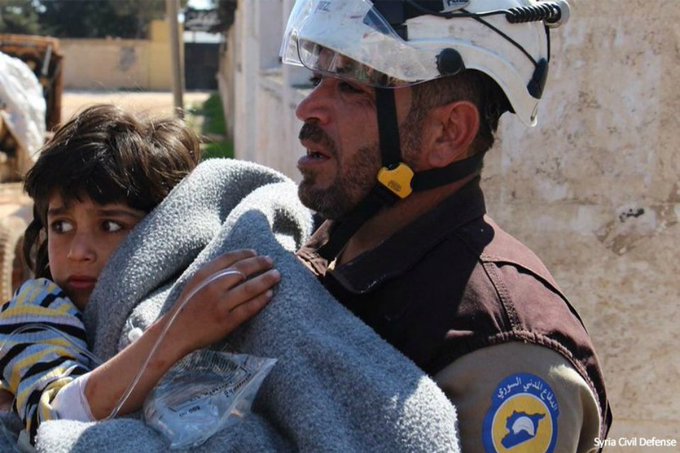 The White Helmets are true modern day heroes – rushing to save the Syrian people as bombs rained down.
The UK is proud to have led the international effort to secure their safety.

Hunt is now a prime contender to take over the leadership of Britain’s ruling Conservative Party. Ed. This file photo shows a member of the so-called White Helmets “aid” group which independent researchers cite as an example of group members previously being part of terrorist groups in Syria.

At least 40 members of the White Helmets organization have admitted during recent interviews that they staged chemical attacks in Syria to provoke retaliation against President Bashar Assad, Foundation for the Study of Democracy Director Maxim Grigoriev said on Thursday as he unveiled the results of a new study at the UN.

“We have interviewed … 40 members of the White Helmets, including those from Douma, who provided a detailed description of their methods commonly used by their organization to fake scenes,” Grigoriev said.

The foundation conducted a fact-finding mission in Syria and located both White Helmets members and dozens of other people who participated in the staged attacks, Grigoriev said.

“Those people told us in detail how they had to participate in the staging for few dollars to buy some food for their families,” he said.

One woman recounted how she was given white burial shroud to wrap herself up in and then told to lay on the ground and smear her mouth with toothpaste, Grigoriev said.

Another recalled being told to “close his eyes” as he was filmed being taken to a medical center by members of the White Helmets.

“Amar Al Mustafa Ibn Mohammad from Aleppo saw with his own eyes how they simulated a chemical attack, they brought children, laid them down, put civilians away and filmed children as if they died in the chemical attack,” Grigoriev said.

A White Helmets member in Douma told the investigators that local children were given candies as rewards for their participation in the staged videos.

Grigoriev pointed out that the investigation cast considerable doubt on the findings of the Organization for the Prohibition of Chemical Weapons (OPCW), which blamed Assad for chemical attacks in Syria’s Douma in 2018.

The OPCW’s conclusions relied on falsified facts and untrustworthy or unidentified sources, he noted.

In March, the OPCW issued its final report on the investigation regarding the incident of alleged use of toxic chemicals as a weapon in Duma, Syria, in April 2018, which identified chlorine as “most likely” chemical agent used in the attack.

The facts presented in the foundation’s investigation “confirm that the OPCW has deliberately failed to conduct an impartial assessment of the incident in Douma and raise doubts as to what else the organization is capable of making… in the future,” Grigoriev said.

The Foundation for the Study of Democracy interviewed 15 witnesses at the site of the Douma attack, 40 members of the White Helmets who admitted faking attacks, and more than 25 others who saw the White Helmets stage the attacks. It also analyzed photographs and videos of the incident.

The White Helmets, also known as Syria Civil Defence (SCD), operates in parts of rebel-controlled Syria and Turkey and claims to be a group of volunteer rescue workers.

The Syrian and Russian governments have accused the White Helmets of staging several provocations involving chemical weapons to justify potential foreign interventions and the presence of foreign forces in Syria, as well as carry arms and support terrorist groups.

The OPCW investigation was launched after the White Helmets group published a video of the reported attack in Douma, which is located in the Damascus neighborhood of Eastern Ghouta. The video showed local residents, both adults and children, being treated in the hospital after the alleged attack.

The reports about the attack and the publication of the footage by the White Helmets prompted missile strikes by France, the United Kingdom and the United States on alleged chemical weapons production facilities in Damascus.

The Russian Foreign Ministry has said that the claims about the alleged use of toxic chemicals by the Syrian government were aimed at justifying external military action.