The BMW X5 xDrive45e iPerformance has a whole host of new features, including a turbo-hybrid system developed from scratch, increased electric range and 394bhp.

The ubiquitous X5 made its debut back in 1999, way before the SUV trend went mainstream. This early play on behalf of the German manufacturer paid off – since then it has sold more than 2.2 million of the model in it’s various guises.

The most recent incarnation came in mid 2018, when BMW introduced its next-generation X5, and since then we have been waiting for the electrified version of its popular midsize SUV to be announced. This year it finally arrives.

The new xDrive45e iPerformance plug-in hybrid off-roader, a replacement for the 2015 xDrive40e, has a number of improvements over its predecessor, not least the fact that the hybrid powertrain is all-new, having been developed from scratch.

This electrified X5 takes the form of a 3.0-litre turbocharged petrol engine developing 286bhp working alongside an electric drive setup with an output of 112bhp. So, with the power of both combined, the new xDrive45e can deliver a not inconsiderable 394bhp (the old xDrive40e had a total of 308bhp) and a mighty maximum torque of 600Nm.

The combustion engine and electric motor deliver power to an eight-speed Steptronic transmission and BMW’s xDrive all-wheel drive system. The result is the drive torque is transferred to all four wheels not only when using the combustion engine or both drive units, but also when driving on electric power alone. 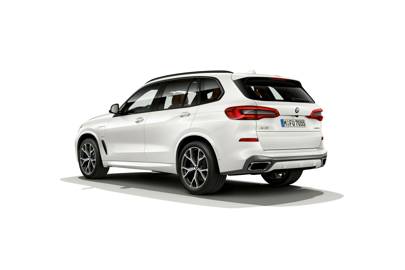 While the new car will be built in BMW’s Spartanburg facility in South Carolina, the maker’s biggest plant, the hybrid tech itself will come from the operations in Dingolfing, in Southern Bavaria, Germany, the location of the group’s largest vehicle production site in Europe.

That hybrid architecture will have an impact on handling, too. As with most EVs, the battery is in the base of the vehicle, so the centre of gravity is lower than in BMWs other model variants. You do sacrifice boot space, though (as with many electric vehicles), with the luggage compartment volume down some 150 litres, though you still get a 500-litre trunk. The main downside of the xDrive45e iPerformance is that this version of the new X5 won’t be going on sale until later this year.

While you’re waiting for the new X5, check out our guide to the best electric cars you can buy right now.