Authored by Mike Shedlock via MishTalk,

Johnson is headed for a landslide victory based on votes already cast. Hunt can’t win even if he gets 100% of the rest.

Unlike a general election, held on a single day plus a variable number of postal votes, a conservative party election is entirely postal. The voting period ends July 22.

On the basis of votes already cast, the Conservative Home Page says “Johnson has Won Already“.

Today, our survey shows Johnson on 72 per cent and Hunt on 28 per cent. We have varied the standard question and added one to ask whether or not respondents have already voted. Seventy-one per cent of respondents say that they have done so

If the survey is accurate, it would be reasonable to assume, on the evidence available at the moment, that Johnson will win somewhere between 67 per cent and 72 per cent of the vote.

And if the survey is correct, Johnson has won this contest already. Even if the entire 28 per cent of those who haven’t voted yet opt for Hunt, he cannot catch the front-runner.

In conclusion, our surveys and YouGov’s poll last weekend are all singing the same song. Johnson has won.

The 67-72% prediction takes into consideration a You-Gov poll last week that had Johnson at 67% and Hunt at 29%.

That being said, the voting records of these newly-joined members are still strongly Conservative: 92% voted Tory in 2017, as did 71% in 2015. Only 2% did at the EU elections (but then so did only 22% of all members) https://yougov.co.uk/topics/politics/articles-reports/2019/07/11/does-conservative-party-have-problem-entryism?utm_source=twitter&utm_medium=website_article&utm_campaign=chris_curtis_tory_entryism … 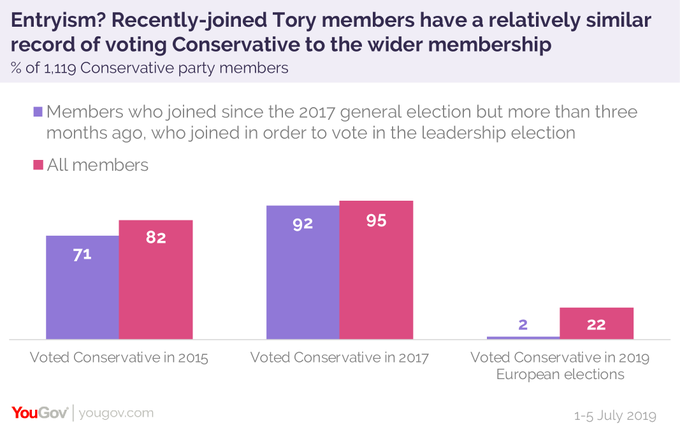 These newly-joined members are more pro-Boris.: 85% say they will vote for him. But given the membership as a whole backs Boris over Hunt by 74% to 26%, all these new members are doing is shifting the dial, not changing the resulthttps://yougov.co.uk/topics/politics/articles-reports/2019/07/11/does-conservative-party-have-problem-entryism?utm_source=twitter&utm_medium=website_article&utm_campaign=chris_curtis_tory_entryism … 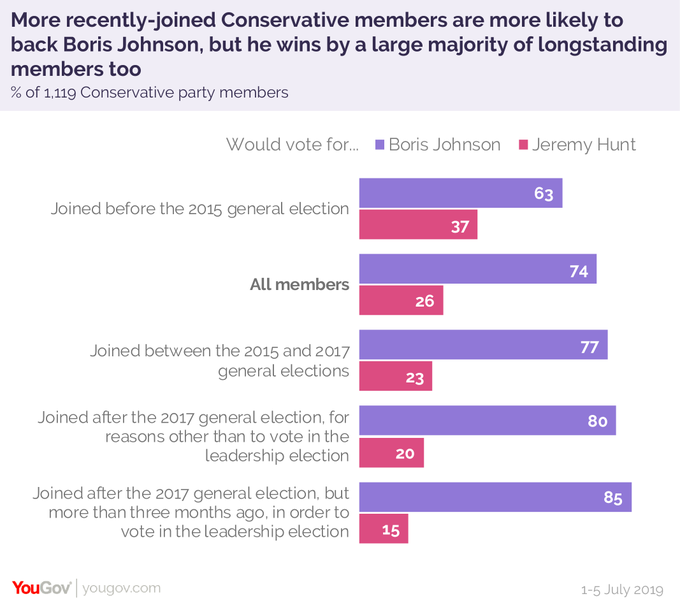 Deliver Brexit or Else 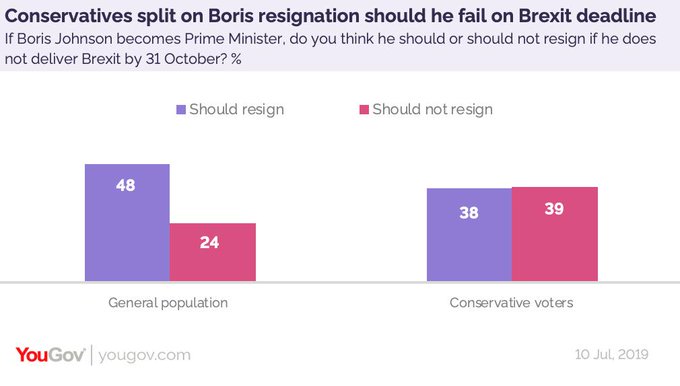 Congratulations to Boris Johnson, the next UK PM.

He will deliver Brexit one way or another.