London (CNN)Boris Johnson has only been Prime Minister for seven weeks, but it appears he is already out of ideas on Brexit.

On Monday night, Johnson suspended Parliament, the UK’s legislative branch of government. The move came after a punishing evening in which his government lost two parliamentary votes adding to his four losses from last week.

As well as rejecting his motion to hold an early general election, parliament voted on Monday to force Johnson’s senior aides to disclose their private communications on all matters concerning the suspension of Parliament. It ultimately won’t affect the politics much, but it’s another embarrassing defeat for a brand new leader.
Last week, lawmakers took control of the parliamentary process from Johnson’s government. It then passed a bill designed to force the Prime Minister to request a Brexit extension from the European Union, thereby theoretically ruling out a no-deal Brexit on October 31. Finally, out of options in a parliament where he has lost his majority, Johnson tried — and failed — to trigger an early election.
Johnson’s suspension of Parliament comes at a critical moment in the Brexit process and has set the scene for a frenzied few days in just over a month’s time. 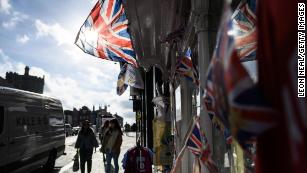 Business wants Brexit resolved. An election may not help
Parliament will return on October 14, after the main parties have held their annual party conferences, political jamborees that will doubtless be little more than shadow fighting between Johnson’s barely-ruling Conservative Party and the myriad of opposition to his no-deal Brexit threat.
Three days later, the other 27 members of the European Union will gather at a summit in Brussels. It’s here that any extension or change to the Brexit deal will take place.
If they agree to give Johnson a new deal — which he claims is the UK government’s primary objective — then he has just two weeks to get this deal approved by Parliament.
This option seems unlikely, given that Johnson’s terms for a new deal breach the EU’s Brexit red lines. The EU’s view that the UK has not yet proposed credible alternatives to the Brexit deal on the table was underscored by the Irish leader, Leo Varadkar, as he made a statement to the press while stood next to Johnson in Dublin on Monday morning.
“Yes, we are open to alternatives. But they must be realistic ones, legally binding and workable. We have received no such proposals to date.”
Which brings us neatly the matter of a Brexit extension.
Essentially, three things could happen, and each scenario leads to bedlam in London.
First, Johnson could obey the law passed in Parliament last week and request a delay to Brexit. The EU could grant this request and no deal would be avoided. Then, after everyone takes a second to catch their breath, all hell will break loose.
The EU, especially France, is clear that it will only grant a third extension if something fundamentally changes in the UK’s political calculus.
Realistically, a fundamental change means an election, which opposition parties would be unlikely to block at that stage, given that no-deal Brexit would be off the table for the time being. This, in turn, means that the extension would only have been approved on the understanding that an election was imminent.
The second option sees the EU decline Johnson’s extension request. He would return to London faced with two choices: revive former Prime Minister Theresa May’s thrice-defeated Brexit deal or try to ram through no deal by default.
This would lead to two weeks of mayhem in which the opposition would try to force a general election by calling for a vote of no confidence in Johnson’s government.
Even if this vote took place on October 18, Johnson would be able to sit tight for 14 days before an election became mandatory under something called the Fixed Term Parliaments Act, which allows a defeated government two weeks to win a confidence vote and get back to governing. 14 days, of course, would take us right up to the Brexit deadline. And even if the anti-no-deal Brexit opposition is successful, a last-ditch extension would be entirely at the discretion of Brussels
The third option looks identical to option two but with an added legal complication. If Johnson refuses to request an extension, he will be ignoring a legal instruction. It has been suggested that should he do so, he could face impeachment or even prison. 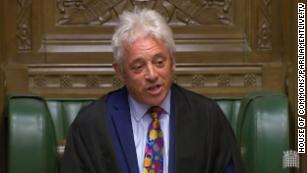 House of Commons Speaker John Bercow to stand down
There should be no doubt that this level of engineered chaos, which would fall agonizingly close to the October 31 Brexit deadline, is a deliberate move by the government.
Johnson’s inner circle of advisers has hardly been coy that it believes Parliament is actively ignoring the will of the people on Brexit and has been only too happy to engage in rhetoric pitching the people versus parliament.
Johnson wanted an early election because he believes his “do or die” Brexit plan would win him a parliamentary majority. That’s why he’s tried to get a vote in favor of one through Parliament again on Monday night.
With his request declined, Johnson finds himself nearly out of options. Tangled in a legal and constitutional web, Johnson has suspended Parliament and pulled the rug from under his opponents by taking from them the last thing he has the power to remove — parliamentary time.
It’s a risky move, but desperate times call for desperate measures. And if Johnson’s last card doesn’t do the job, he might only have one move left: to recall Parliament and call for a vote of confidence in himself which could bring down his own government.
Brexit really has done a number on this country.

As climate crisis escalates, poor nations can no longer rely on rich ones to help out

CNN EXCLUSIVE US extracted top spy from inside Russia in 2017