Authored by Mike Shedlock via MIshTalk,

Like it or not, those are the pertinent facts.

With those facts out of the way, lets turn our attention to the politics of the day as reported by the Guardian Live Blog.

Hunt: Addressing the possibility of a no-deal Brexit, Hunt says that, while it’s not his preferred option, he would take it if he didn’t think a deal was possible by 31 October – even though he acknowledges it’d destroy people’s livelihoods. “I think there is a deal that can unite all wings of the Conservative party and our friends in the DUP. But it’s got to be different to Theresa May’s deal.”

Johnson: Boris Johnson has pledged that the UK will leave the European Union on 31 October “do or die”, as he promised to push for a no-deal Brexit if this was needed to meet the departure deadline. “But I’m not going to do that if there’s a prospect of a better deal.”

The amusing thing here is they are saying the same thing.

Hunt is not remotely believable.

Johnson is certainly more believable. Today he issued a challenge to Hunt. 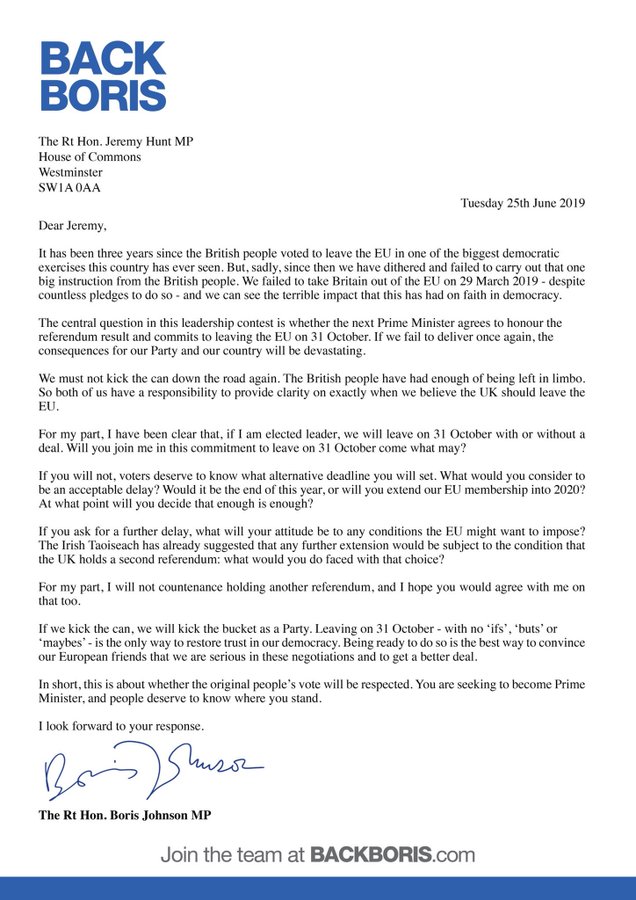 If I become PM, we will leave the EU on 31st October, deal or no deal. Today I have asked @Jeremy_Hunt whether he will also commit to this date, no matter what. We must keep our promises to the British people and deliver Brexit – no ifs, no buts, and no second referendum.

Article 24 pertains to the right of countries to abolish WTO tariffs on condition that both counties agree and both countries set a timeline for reaching a deal. They have 10 years to finalize the deal.

This letter in the Telegraph has undisputed legal authority. It demolishes the mischief-making which has been generated over Article 24 of the GATT agreement.

Johnson stated today: “Gatt article 24 paragraph males it perfectly clear that two countries that are in the process of beginning a free trade agreement may protract their existing arrangements until such time as they have completed any free trade agreement. And that’s a very hopeful prospect. That is the way forward.”

This is my opinion, but Germany is running scared, very scared.

Please consider the Guardian report Germany ‘will talk to the last hour’ to avoid no-deal Brexit.

Germany will fight to the last hour to prevent the UK crashing out of the EU without a deal and is willing to hear any fresh ideas for the Irish border backstop, the country’s ambassador to the UK has said.

Speaking at a car manufacturers’ summit in London, Peter Wittig said Germany cherished its relationship with the UK and was ready to talk about solutions the new prime minister might have for the Irish border problem.

“My country is ready to talk and the chancellor [Angela Merkel] once said she would be willing to talk to the last hour not to have a no-deal scenario,” he said.

“It’s a mindset. We are not giving up in achieving an orderly Brexit. Germany has been a very pragmatic voice in this whole tortuous Brexit process and we will continue to be that.

“Even if we have a short window while the new prime minister is in place, we will welcome any idea how to solve that famous backstop issue and we will be willing to work towards a negotiated deal which is long term the only viable and sensible option for Europe,” he added.

“Our mindset is to explore all pathways to come to a negotiated deal.”

Of course it is. Germany is scared to death its vaunted export machine is about to collapse.

I wrote about that earlier today in Rise of the Greens = Deindustrialization of Germany.

Point number four is in serious play. The German trade surplus with the UK and the rest of the world is huge.

Let’s return to point 10 at the top: Michel Barnier, the EU’s chief Brexit negotiator, admitted on film that the Irish backstop was used as a “tactical and strategic means to apply permanent pressure on the UK.”

Please see Let’s Discuss Brexit (and How the EU Bragged, on Film, About Screwing the UK) for proof, not allegations.

Theresa May repeated many times “No deal is better than a bad deal”. It was a lie the UK never believed.

Johnson, unlike Hunt, appears to be serious.

The EU will play as a patsy anyone who is not serious about leaving.

The power is in Johnson’s hands.

If he really is willing to leave the EU, there is enormous pressure on the EU to bend.

Think about all the lies the EU made and Remainers made about instant collapse of the UK if the vote was leave.

What if, as I suspect, there is far greater damage to the EU than the UK because of an EU collapse in exports on a hard Brexit.

This has to be on their minds.

The EU’s worst fear has to be that if the UK walks, that it is the EU, not the UK that takes the bigger hit.

All Johnson needs to do is stand his ground.