About 175 people, including a quarantine officer, have now been infected on the Diamond Princess off Yokohama.

The death toll in China from the coronavirus outbreak continued to climb on Wednesday and 39 more people on a cruise ship off Japan were diagnosed with the infection as the World Health Organization (WHO) warned the virus – now named COVID-19 – posed a “grave threat” to the world.

The WHO is holding a conference in Geneva on combating the virus.

Its chief, Tedros Adhanom Ghebreyesus said viruses could have “more powerful consequences than any terrorist action”.

A further 94 deaths were reported on Wednesday in the hardest-hit province of Hubei, the central region where about 56 million people are living under increasingly severe restrictions with three more elsewhere in the country, the National Health Commission said.

Deaths in mainland China now stand at 1,113 with the number of confirmed cases nationwide totalling 44,653.

Although 99 percent of the infections are in China, where the outbreak remains “very much an emergency”, and it also “holds a very grave threat for the rest of the world”, Tedros said at the conference.

Two deaths have been recorded outside mainland China – one in Hong Kong and one in the Philippines.

On the Diamond Princess, a cruise ship quarantined off Yokohama in Japan, an additional 39 people have tested positive for the virus, the health ministry said on Wednesday.

About 3,700 passengers and crew are on the ship.

At least 25 countries have confirmed cases and several nations have evacuated their citizens from Hubei.

Here are the latest updates:

An Iranian woman has died of a suspected coronavirus infection, the state daily newspaper IRAN reported without citing any sources.

The 63-year-old woman died in a Tehran hospital on Monday, the newspaper said, and an investigation has been ordered into the cause of her death.

A spokesman for Iran’s Health Ministry, Kianush Jahanpour, denied the report: “There have been no cases of coronavirus in Iran.”

Russia discharged a Chinese national from hospital in the Siberian city of Chita after he recovered from a coronavirus infection, local authorities said.

He was the second of Russia’s two confirmed cases of coronavirus to recover.

The other victim, also a Chinese national, was said by authorities on Tuesday to have recovered and been released from quarantine in Siberia’s Tyumen region.

Singapore’s biggest bank DBS has evacuated 300 staff from its head office as a precautionary measure following a confirmed coronavirus case at the bank, according to an internal memo seen by Reuters news agency.

“I regret to inform you that there is one confirmed case of coronavirus at DBS Asia Central on Level 43 today,” Singapore country head, Tse Koon Shee said in the memo.

“As a precautionary measure, all 300 colleagues on Level 43 at MBFC have been evacuated and will work from home for the time being.”

Indonesia has criticised a US study questioning why the country has not recorded any cases of the coronavirus, calling the findings an insult and insisting it was on high alert.

A study by Harvard University public health researchers this week said Indonesia should have reported cases because of its air links to China and the city of Wuhan.

“They can be baffled but it’s a fact” there are no cases, he told reporters in Jakarta.

“I am just telling you like it is. Hopefully there won’t be any cases and we will keep praying, but we’re being vigilant at the highest level.”

Taiwan’s Foxconn, which makes iPhones for Apple and also supplies other tech companies, hopes to resume half of its production in China by the end of the month, a source told Reuters on Wednesday.

It aims to resume 80 percent of production in China in March, the source added.

Southeast Asian lawmakers have called on regional governments to stop using broadly-worded ‘fake news’ laws against people accused of spreading misinformation about the coronavirus, urging them to invest in health messaging campaigns to educate the public on the outbreak instead.

A number of people in Thailand, Indonesia and Malaysia face hefty jail terms for sharing misinformation online, while Vietnam has threatened steep fines for those found guilty of sharing ‘fake news’ about the virus.

“Across the region we are seeing a trend of ambiguously-worded laws being used to prosecute citizens,” Teddy Baguilat, a former Philippines parliamentarian who is on the board of ASEAN Parliamentarians for Human Rights, said in a statement. 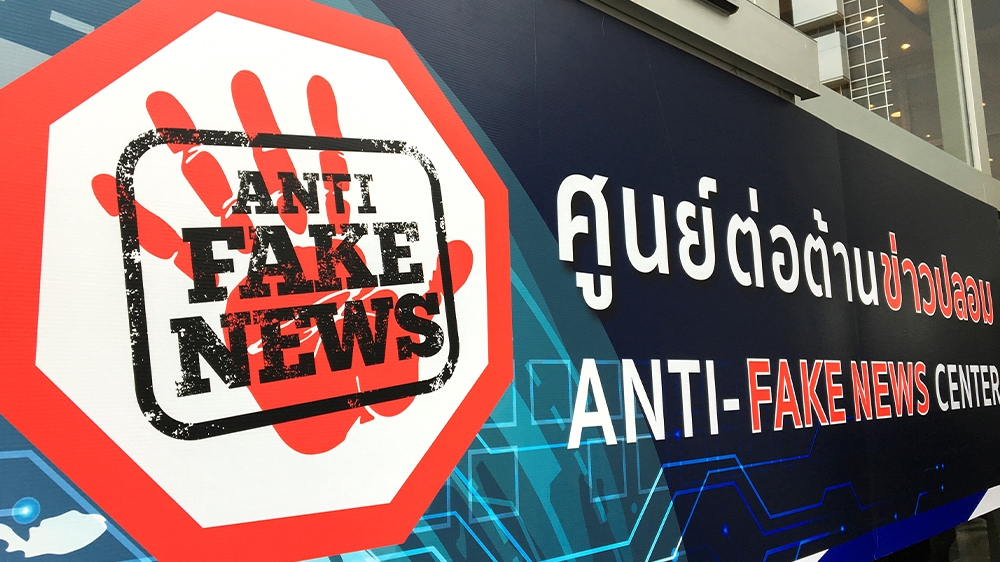 Thailand has used its Anti-Fake News centre to identify and charge two people for sharing false information on the virus [File: Patpicha Tanakasempipat/Reuters]

“Laws that rely on vague prohibitions, such as punishing so-called ‘fake news’, excessively restrict the right to freedom of expression and should be abolished.”

Malaysia has abolished its fake news law but is prosecuting a woman for ‘public mischief’ over coronavirus posts under the Penal Code.

South Korea on Wednesday welcomed home 147 people, including 67 Chinese nationals, in its third evacuation flight from Wuhan. It was the first time Chinese spouses and immediate family members had been allowed on a Korean flight

At least one of the passengers was showing symptoms of the virus, officials said.

On Tuesday night, the same aircraft carried 16 Chinese nationals who wished to return to their homes in Hubei province, including at least one woman who had been diagnosed with the virus but recovered, Yonhap news agency reported.

South Korea’s Asiana Airlines has asked members of its cabin crew to take unpaid leave following the suspension of flights to China, a company spokesman said on Wednesday.

Asiana Airlines is currently accepting applications from cabin crew members to take an unpaid voluntary leave of absence between February 15 and 29, the spokesman said.

The airline is also considering accepting applications for unpaid leave in March.

An additional 39 people on board the Diamond Princess cruise ship anchored off Yokohama have been confirmed to have the coronavirus, Japanese Health Minister Katsunobu Kato said on Wednesday.

“Out of 53 new test results, 39 people were found positive,” he told reporters. Some 174 people on the ship. which has 3,711 passengers and crew, now have the infection.

Those who remain on the ship have been asked to stay inside their cabins and are allowed only briefly onto open decks where they have to wear masks and keep a distance from each other.

Read all the updates from Tuesday, February 11 here.