A new poll has put the Conservative Party’s level of support for a General Election down in the low 20s, their worst poll rating for many years. Richly deserved given the UK still remains in the European Union and is now set to vote for another batch of British MEPs.

According to Election Maps UK, this is the lowest Conservative vote share in a Westminster poll since 1997. Europe Elects also tweeted that it would amount to their worst election result on a national level ever.

2,209 people are talking about this

ComRes Chairman, Andrew Hawkins, is quoted by The Telegraph as saying: “This is the lowest level of Tory support I can remember in 16 years in this job.”

Last night he also posted a graphic that explained why the Conservatives are “haemorrhaging voters to the Brexit Party” that shows Tory voters favour a No Deal Brexit, with 60% backing such an outcome.

Meanwhile 72% of Conservatives are against a long Brexit delay to negotiate a Customs Union deal and 70% would find a referendum on May’s deal vs. Remain as ‘unacceptable’.

This, from early last week, helps explain why the Tory Party is haemorrhaging voters to Brexit Party 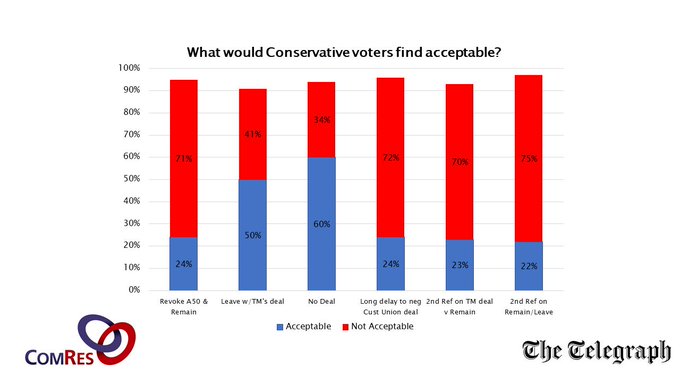 119 people are talking about this

Theresa May’s pathetic failure to deliver Brexit and her broken promises now have consequences for all to see. The rise of a new Brexit Party and Conservative voters disgusted by the government’s refusal to deliver an EU exit on WTO terms are the new political reality.