Funeral for Qassem Soleimani, head of Iran’s Quds Force who was killed in Baghdad by US air strike, begins in Ahvaz.

Funeral processions to honour Qassem Soleimani, head of Iran’s elite Quds Force who was killed in a US air strike in Baghdad, have begun in the Iranian city of Ahvaz early on Sunday, hours after his remains arrived from Iraq.

The move by the US has drawn worldwide condemnation from leaders and officials who fear that tensions in the region could escalate drastically. Iran’s Supreme Leader Ali Hosseini Khamenei warned that “a harsh retaliation is waiting”.

On Saturday, US President Donald Trump threatened to hit 52 Iranian sites “very hard” if Iran attacked US citizens or assets.

Pope calls for dialogue amid ‘air of tension’

Pope Francis called for dialogue and restraint while speaking at the Sunday Angelus prayer at the Vatican.

The pope did not mention Iran by name but spoke of a terrible air of tension that could now be felt in many parts of the world.

“I call on all sides to keep the flame of dialogue and self-restraint alight and ward off the shadow of hostility,” he said.

“War only brings death and destruction.”

Crowds gather ahead of Nasrallah speech

Supporters of the Iran-backed Hezbollah movement in Lebanon have gathered south of the capital ahead of an expected speech by Hezbollah leader Hassan Nasrallah.

Al Jazeera’s Zeina Khodr, reporting from Beirut, said a ceremony is expected to start “soon” to commemorate Soleimani. a man people in the Hezbollah stronghold Beirut suburb describe as a “hero”.

“Images of the architect behind Iran’s influence across the region, Qassem Soleimani, is everywhere in the streets of Beirut’s southern suburbs,” Khodr said.

Mousavi: Iran will respond to any further threats

Iran will respond to any further threats, Iranian Foreign Ministry Sokesman Abbas Mousavi said in televised remarks, hours after Trump said Washington would target Iranian sites if Tehran attacks Americans or US assets in retaliation for the killing of Soleimani.

“We will not remain silent against any threat,” Mousavi said, adding that Iran is not pursuing war, but is “prepared”.

Mousavi also said that officials in Iran planned to meet on Sunday night to discuss the next steps in exiting the 2015 nuclear deal with world powers and that it would be even bigger than initially planned.

In 2018, the US unilaterally withdrew from the accord and reimposed sanctions.

Iran’s foreign minister has been invited to Brussels, with the European Union urging a “de-escalation of tensions” in the Gulf.

The EU’s foreign policy chief Josep Borrell made the offer to Mohammad Javad Zarif during a telephone call this weekend, a press release said.

“Borrell invited the Iranian Foreign Minister to Brussels to continue their engagement on these matters,” it said.

Iran summoned the Swiss envoy representing US interests in Tehran to protest against Trump saying Washington would target Iranian sites if Tehran attacks Americans or US assets in retaliation for the killing of Soleimani.

Iran has once again summoned Swiss envoy over Trump’s threat to target 52 Iranian sites. Iran has expressed strong protest over the threatening remarks, and said such a threat reminds one of Mongols’ invasions or terrorists’ destruction of cultural heritage

Israeli Prime Minister Benjamin Netanyahu said Trump was “worthy of all appreciation” for ordering the killing of Soleimani.

In an address to his cabinet, Netanyahu said Soleimani “initiated, planned and carried out many terror attacks” in the Middle East and beyond.

Netanyahu said Israel stood alongside the US in its current campaign against Iran.

Iraq’s parliament was set to convene an extraordinary session during which legislators would reportedly push for a vote on a resolution requiring the government to request the withdrawal of US troops from Iraq.

“There is no need for the presence of American forces after defeating Daesh (ISIL),” said Ammar al-Shibli, a Shia lawmaker and member of the parliamentary legal committee, according to Reuters news agency.

“We have our own armed forces which are capable of protecting the country,” he said.

Around 5,000 US troops remain in Iraq, most of them in an advisory capacity.

Despite decades of enmity between Iran and the US, Iran-backed militia and US troops fought side by side during Iraq’s 2014-2017 war against ISIL.

Remains of Soleimani, al-Muhandis sent to Iran for DNA tests

Iraq’s Iran-backed PMF said that some remains of Soleimani and Iraqi militia leader al-Muhandis were sent to Iran for DNA tests to identify their corpses.

In a statement, the PMF said the bodies were torn to pieces and mangled by the explosion following the US strike near Baghdad’s international airport on Friday.

It said the test would take a few days, after which the remains of al-Muhandis will be brought back to Iraq for burial in the holy Shia city of Najaf. 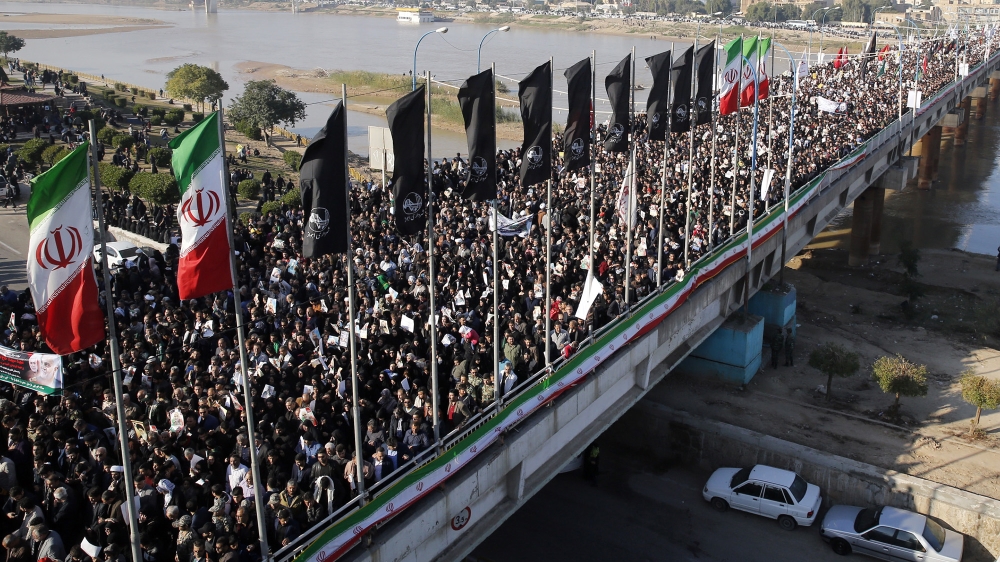 Iran’s Minister Jahromi says Trump ‘a terrorist in a suit’

Trump is “a terrorist in a suit”, Iranian Information and Telecommunications Minister Mohammad Javad Azari-Jahromi said in a Twitter post.

“Like ISIS, Like Hitler, Like Genghis! They all hate cultures. Trump is a terrorist in a suit. He will learn history very soon that NOBODY can defeat ‘the Great Iranian Nation & Culture’,” Jahromi said.

Like ISIS, like Hitler, Like Genghis!
They all hate cultures. Trump is a “terrorist in a suit”. He will learn history very soon that NOBODY can defeat “the Great Iranian Nation & Culture”.#HardRevenge#QasemSoleimani https://twitter.com/realDonaldTrump/status/1213593975732527112 …

….targeted 52 Iranian sites (representing the 52 American hostages taken by Iran many years ago), some at a very high level & important to Iran & the Iranian culture, and those targets, and Iran itself, WILL BE HIT VERY FAST AND VERY HARD. The USA wants no more threats!

609 people are talking about this

British Foreign Secretary Dominic Raab said he had spoken to Iraq’s prime minister and president to urge a de-escalation of tensions in the region.

Raab, who described Soleimani as a “regional menace”, and said he was sympathetic to the situation the US found itself in, said he also planned to speak to Iran’s foreign minister.

“There is a route through, which allows Iran to come in from out of the international cold,” he told Sky News.

“We need to contain the nefarious actions of Iran but we also need to de-escalate and stabilise the situation.”

Tens of thousands of black-clad mourners have filled the streets of the Iranian city of Ahvaz to pay their respects to Soleimani.

Authorities plan to take Soleimani’s body to the holy city of Mashhad later on Sunday, as well as Tehran and the holy city of Qom on Monday for public mourning processions, then to his hometown of Kerman for burial on Tuesday. 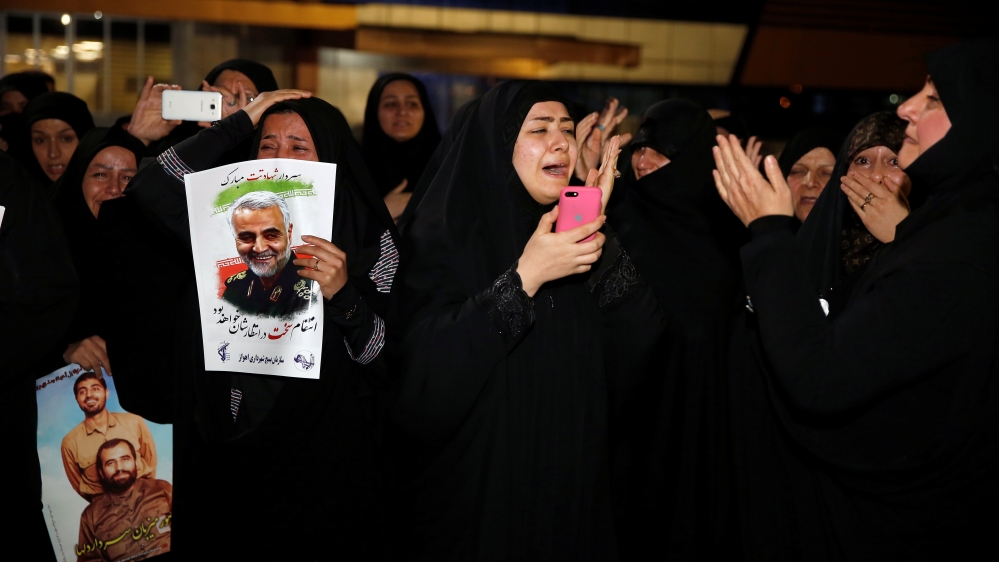 Iran’s Iranian Foreign Minister Mohammad Javad Zarif said any decision to target the country’s cultural sites would be a “war crime”, hours after US President Donald Trump threatened such action.

“Whether kicking or screaming, end of US malign presence in West Asia has begun,” Zarif said.

-Targeting cultural sites is a WAR CRIME;
-Whether kicking or screaming, end of US malign presence in West Asia has begun.

2,663 people are talking about this

Iran’s army chief said Washington lacked the “courage” to initiate a conflict, after Trump threatened to hit dozens of targets inside the Islamic republic.

“I doubt they have the courage to initiate” a conflict, Major General Abdolrahim Mousavi was quoted as saying by state news agency IRNA.

Saudi Arabia was not consulted over the US air strike that killed Soleimani, as the kingdom sought to defuse soaring regional tensions, a Saudi official told AFP news agency, requesting anonymity.

“The kingdom of Saudi Arabia was not consulted regarding the US strike,” the official said.

“In light of the rapid developments, the kingdom stresses the importance of exercising restraint to guard against all acts that may lead to escalation, with severe consequences,” the official added.

Oman has urged the US and Iran to utilise diplomatic channels to resolve issues and  called on the international community to increase their efforts to achieve security and stability in the region, according to a statement carried by state media.

“Oman is following the unfortunate developments and the state of tension and escalation between the United States and the Islamic Republic of Iran, and calls on both sides to turn to dialogue and diplomatic channels to resolve issues,” Oman news agency said. 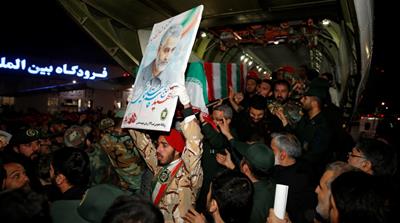 Iraqi security forces have been on high alert as they brace themselves for a potential reaction, Al Jazeera’s Osama Bin Javaid, reporting from Baghdad, said.

“We’ve also heard from one leader of the militia Kataib Hezbollah, which has been deemed as a terrorist organisation by the US, that all Iraqi forces should distance themselves from US bases from Sunday onwards,” Bin Javaid said.

US troops are invariably based in Iraqi military posts alongside local forces.

Bin Javaid said there has been a flurry of diplomatic activity to try to de-escalate the situation in the region, spearheaded by Qatar’s foreign minister.

Soleimani’s body to arrive in Mashhad

Soleimani’s body is due to arrive in the Iranian city of Mashhad in the next few hours, Al Jazeera’s Dorsa Jabbari said, where a ceremony will be held for him at the Imam Reza shrine – believed to be the holiest place in Iran.

“The whole country is in mourning … there is a lot of anger and frustration,” Jabbari said from Mashhad.

“Iranians want their government and their military to respond. They want revenge.” 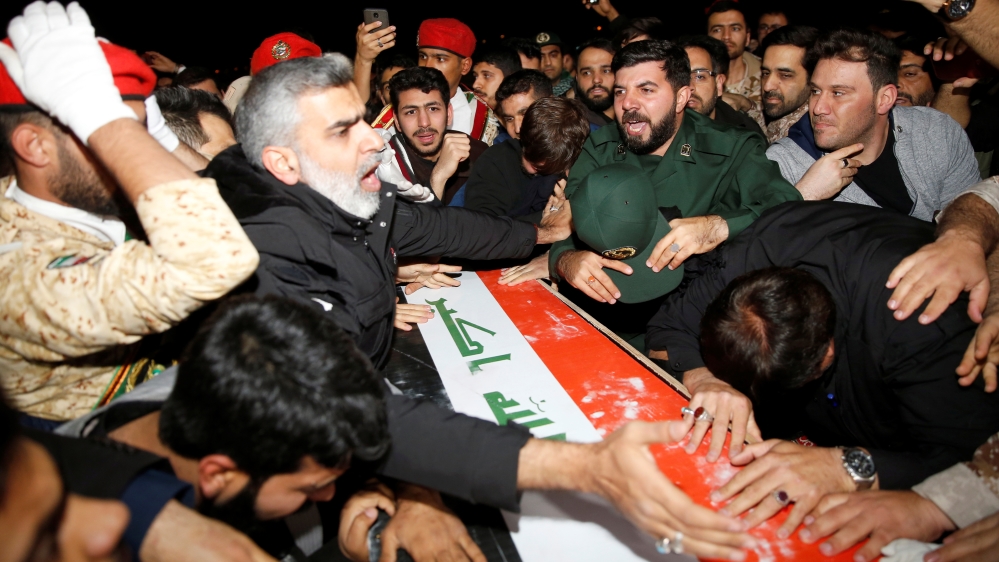 President Donald Trump warned that the US would hit Iran harder than ever before if Tehran retaliates for the assassination of Soleimani.

Trump wrote on Twitter: “If they attack again, which I would strongly advise them not to do, we will hit them harder than they have ever been hit before!”

He followed up with another tweet, saying the US would use its “brand new beautiful” military equipment “without hesitation” if the Iranians retaliate.

Thousands of mourners gathered in Iran’s southwestern city of Ahvaz, where funeral processions to honour Soleimani began on Sunday morning.

Footage on state television showed people dressed in black in Mollavi Square, holding flags in green, white and red – depicting the blood of “martyrs”, while others held portraits of the slain general.

Soleimani’s remains returned to Iran on Sunday and were flown to the city of Ahvaz in the country’s southwest, the official IRIB news agency reported.