If approved, the event will be held before the Palace of Westminster, seat of the House of Commons and House of Lords, on Parliament Square, with attendees regaled by comedians, musicians, and a fireworks display.

“Jan 31 is a moment to celebrate, when the Establishment have been beaten by the people,” the veteran campaigner told The Sunday Telegraph.

“We will invite people from all parties, business figures — they will be asked to join the celebration,” he added — including Prime Minister Boris Johnson.

Richard Tice, the straight-laced respectable co-chairman of the pull-no-punches Leave.EU campaign during the EU referendum who later went on the found the more by-the-numbers Leave Means Leave campaign and serve as Brexit Party chairman, added that he expected “many thousands” to attend the event, which he hopes will receive approval from the Greater London Authority next week.

“Brexiteers should celebrate this historic moment in our nations democratic history,” said the MEP.

“Parliament Square, under the watchful eye of Churchill, is the right place to lead the commemorations… If there is a ticket price we want it to be extraordinarily affordable/almost zero.”

Mathew Goodwins Spectator blog provides the analysis that Labour’s support declined more heavily in pro-Leave seats when there was a Brexit party candidate than when there was not. This correlates well with what I saw on the ground in the General Election. 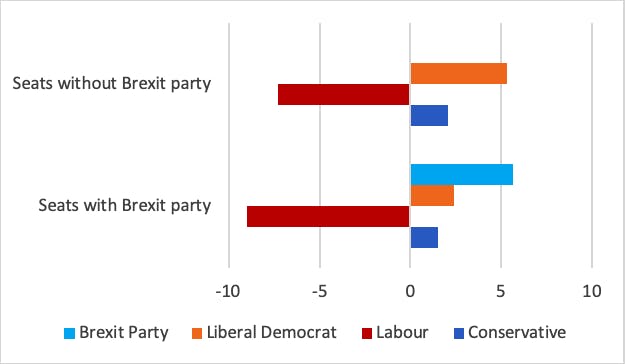 28 people are talking about this
https://www.breitbart.com