Alternative for Germany (AfD) party plans to sue Chancellor Angela Merkel herself over “abuse of office”. The party claims she “coerced” a state PM into resigning after he was elected in a scandalous vote.

The anti-migrant and anti-establishment AFD wants to file two lawsuits against the Chancellor, arguing that her actions forced Thuringia’s newly-elected Prime Minister to step down last week.

The chancellor was among those, who sharply criticized the outcome of the regional parliament’s vote. Against recommendation from superior party members, MPs from her Christian Democratic Union (CDU) joined forces with the AfD – a move viewed as a taboo breaker — to support Thomas Kemmerich, from liberal Free Democrats (FDP).

Now, AfD claims that she “coerced” the regional prime minister into resigning. “Since Ms. Merkel no longer holds a relevant position within the CDU and was in Africa not as a CDU member but as the German government head, it is a clear case of abuse of power and violation of the right for equal opportunities for all parties,” an AfD co-chair, Joerg Meuthen, said, referring to Merkel’s trip to South Africa and Angola, during which she made her comments.

Bjoern Hoecke, the head of the AfD regional office in Thuringia, meanwhile plans to file his own lawsuit against Merkel over “coercion” as well. “The fact that the chancellor has forced an elected prime minister from another party to resign is unacceptable,” he said in a Twitter post as he announced his plans. 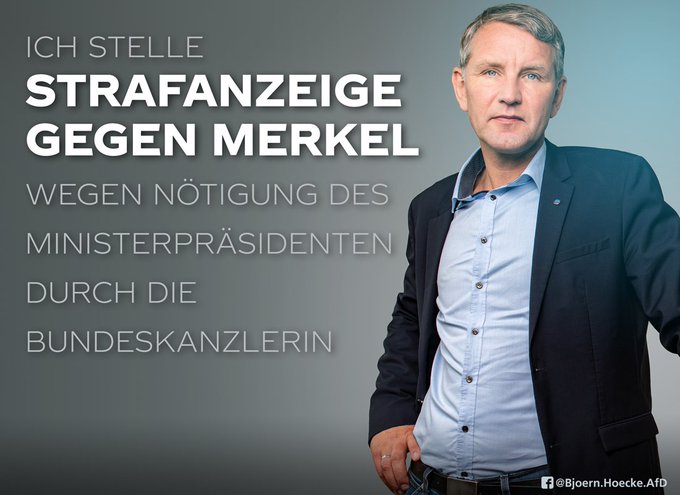 2,141 people are talking about this

Critics, however, allege the move is more likely a PR-stunt. Merkel called Kemmerich’s election “unforgivable” and said that its results “must be reversed.” Yet, whether it was her words that eventually forced Thuringia’s prime minister to resign is a matter of a debate. Surprisingly unanimous vote by the CDU and AfD that brought him to power has sent shockwaves across Germany, and unleashed a massive scandal, sparking both a wave of indignation among the politicians and public protests in Thuringia and beyond.

The vote broke a longstanding unwritten taboo for major German parties on aligning with the right-wing AfD. The scandal also dealt another blow to Merkel’s party, further straining its relations with their coalition partners — the Social Democrats — and eventually leading to the resignation of the current party leader — and Merkel’s would-be successor — Annegret Kramp-Karrenbauer.

The CDU’s popularity in Thuringia plummeted dramatically. The party’s public support fell to just 13 percent, down from more than 21 percent it had during the last regional elections in October 2019, according to a Sunday poll commissioned by the German MDR broadcaster. AfD’s popularity in the region stayed relatively unchanged while the Left Party, that already had the strongest mandate in the regional legislature, saw an eight-percent surge in public backing, and now enjoys support of almost 40 percent of the voters.