Third-biggest bloc in parliament could pick as leader a candidate who recently railed about ‘Islamisation of the West’.

Germany‘s far-right Alternative for Germany (AfD) party is set to elect new leaders, with its increasingly influential hardline wing seeking to tighten its grip on the group after a series of electoral victories.

The leadership vote by AfD delegates at a congress in Braunschweig on Saturday will decide the future direction of the anti-migrant, anti-Islam party, which has upended German politics since entering the national parliament two years ago as the third-largest force.

Underlining the polarising effect the AfD has in Germany, up to 12,000 protesters are expected to gather outside the congress hall to demonstrate against what they call a racist party. On Friday night, some 1,000 black-clad protesters marched through the centre of the city, heeding the call of an anti-fascist group.

Within the hall, tensions are also set to run high as 78-year-old Alexander Gauland is expected to step down from his co-chairman role, while 58-year-old Joerg Meuthen is set to defend his seat against a challenge from party radicals.

Who are Germany’s far-right AfD?

Bjoern Hoecke, the leader of the hardline Fluegel (“Wing”) faction, has not directly put forward his name for Gauland’s spot.

But anyone seeking the post would have to get the backing of his faction, which is known for its criticism of Germany’s culture of remembrance.

The AfD, which was only established six years ago, is riven with personal and ideological rivalries.

One likely candidate who might please all sides is Tino Chrupalla, a 44-year-old MP from the eastern state of Saxony.

Chrupalla, who met with former US President Donald Trump adviser Steve Bannon in Berlin earlier this year, can count on the support of Hoecke’s Fluegel.

At the same time, Gauland has also tacitly given him his backing by pledging to stand aside if Chrupalla went for his post.

Chrupalla’s main challenger will be fellow AfD MP Gottfried Curio, a fiery orator whose parliamentary speeches have made him a far-right social media star.

Chrupalla has presented himself as a more serious candidate, but he too has prompted outrage with his rhetoric.

Last month, he was booed in parliament after accusing Chancellor Angela Merkel of treating her voters as “underlings” with “micro-aggressions against everything German”.

Chrupalla has also called the “Islamisation of the West” a “reality”, saying that one could qualify it as a replacement of the population.

Unlike most German MPs, Chrupalla does not hold a doctorate, and has railed against perceived intellectual snobbery in Germany’s political class.

He is also seen as a representative of the former East Germany, where the AfD took more than 20 percent of the vote in three recent state elections.

Hoecke recently described Chrupalla as “one of the AfD’s great representatives in the East”.

Meanwhile one of the Fluegel’s members, 49-year-old MP Nicole Hoechst, is now also plotting to unseat co-leader Meuthen, according to reports in the Welt and Taz newspapers.

Meuthen, a university professor from western Germany, represents the more moderate wing of the party. 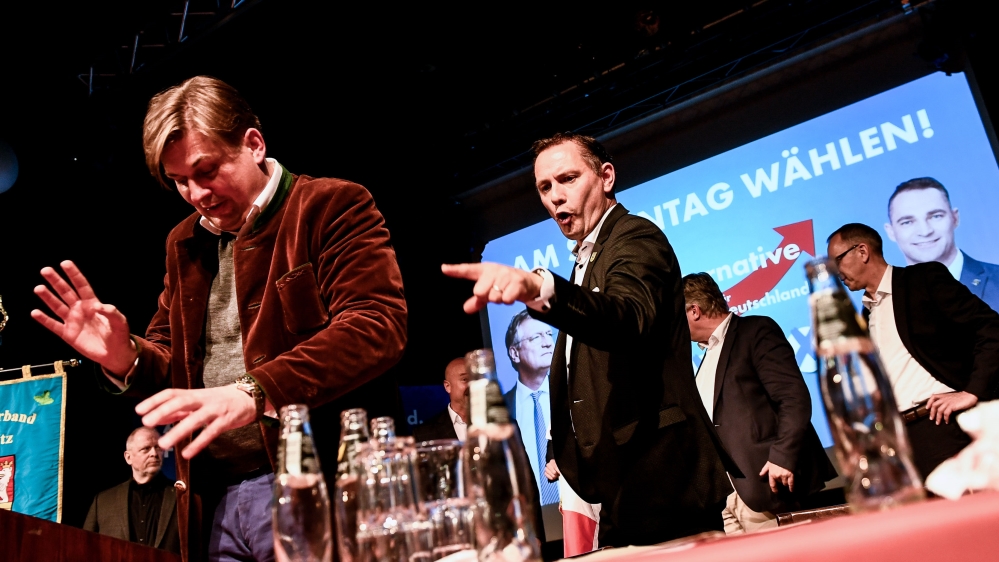 With 91 MPs, the AfD is now the third political force in the German parliament but its support in opinion polls has stagnated at around 13 to 15 percent.

The AfD started out as a Eurosceptic party but became increasingly anti-migrant and opposed to Merkel after the chancellor welcomed around one million asylum-seekers in 2015 and 2016.

Mainstream parties have refused to work with the AfD and therefore prevented it from holding executive power on a national or regional level.

“The Wing” in particular has drawn scrutiny as it has attacked one of the foundation stones of Germany’s post-war political culture – atonement for its Nazi past.

Hoecke notoriously described Berlin’s Holocaust Memorial as a “memorial of shame”, while his colleague Andreas Kalbitz has been accused of association with neo-Nazi organisations.

Such accusations have failed to frighten off voters, but they have drawn the attention of the secret services to the party’s activities.