President Donald Trump said on Friday that is was “illegal” for House Speaker Nancy Pelosi to tear up her copy of his State of the Union address, echoing an allegation other Republicans have made.

“Well, I thought it was a terrible thing when she ripped up the speech,” Trump told reporters as he left the White House for a trip to North Carolina. “First of all, it’s an official document. You’re not allowed, it’s illegal what she did. She broke the law.”

MORE: Nancy Pelosi rips up copy of State of the Union speech from Trump

President Trump repeated other Republicans’ claims Pelosi violated the law. GOP Rep. Matt Gaetz announced on Twitter that he has filed an ethics complaint against Pelosi, accusing of “a potential violation of the law.” Gaetz refers to a U.S. code that makes it illegal for public officers to conceal or destroy records.

BREAKING: I’m filing an ethics complaint against @SpeakerPelosi for destroying @realDonaldTrump‘s State of the Union speech.

Her conduct was beneath the dignity of the House, and a potential violation of law (18 USC 2071).

Nobody is above the law. She must be held accountable.

81.1K people are talking about this

Notable legal scholar Jonathan Turley criticized the decision by Pelosi, but in a blog post, said that it was not in fact against the law.

MORE: Speaker Pelosi fires back at President Trump, says she prays ‘very hard’ for him

In a news conference Thursday, Pelosi explained why she tore up the address, saying that as she read through the speech, she saw the “compilation of falsehoods” and though of something that could indicate to Americans that the speech was “not the truth.”

Pelosi railed against the president’s use of guests at the State of the Union and what she called “misrepresentations” in his address.

“So it was, in my view, a manifesto of mistruths, falsehoods, blatantly really dangerous to the well-being of the American people if they believed what he said,” Speaker Pelosi said Thursday. “So again, we do not want chamber of the House of Representatives to be used as a backdrop for one of his reality shows with unreality in his presentation.”

Standing behind President Trump, Speaker Nancy Pelosi rips up a copy of his State of the Union address as soon as he is done delivering the speech. https://abcn.ws/37ZNI2w #SOTU 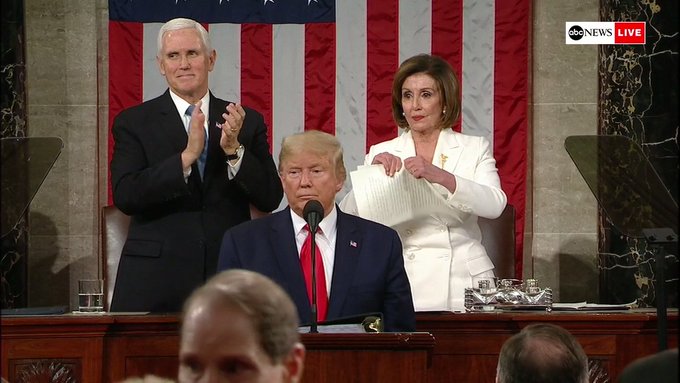 348 people are talking about this

Man pleads guilty to killing his wife on cruise

Neighbor trying to save man kills him with arrow