Zarif’s attendance at the Security Council was planned before Soleimani was killed, escalating global tensions.

Iran’s foreign minister Mohammad Javad Zarif said the United States had declined to issue him a visa to attend a UN Security Council meeting scheduled in New York later this week, as tensions escalate between the two countries after the US killed Iran’s most prominent military commander.

“They fear that someone comes to the US and reveals realities,” Zarif said from Tehran on Tuesday.

His comments come as Iran prepares to burry the remains of general Qassem Soleimani, who was assassinated on Friday in Baghdad, along with Iraqi paramilitary commander Abu Mahdi al-Muhandis.

Under the 1947 UN “headquarters agreement,” the US is generally required to allow access to the UN for foreign diplomats. But Washington says it can deny visas for “security, terrorism and foreign policy” reasons.

Zarif wanted to attend a meeting of the Security Council on Thursday on the topic of upholding the UN Charter. The meeting and Zarif’s travel had been planned before the escalation in tensions between Washington and Tehran.

The Security Council meeting would have given Zarif a global spotlight to publicly criticise the US for killing Soleimani.

Iran’s ambassador to the UN, Majid Takht Ravanchi, has described the killing of Soleimani as “an obvious example of state terrorism and, as a criminal act, constitutes a gross violation of the fundamental principles of international law, including, in particular … the Charter of the United Nations.”

Zarif last travelled to New York in September for the annual gathering of world leaders at the UN – after the US sanctioned him for implementing “the reckless agenda of Iran’s Supreme Leader.” 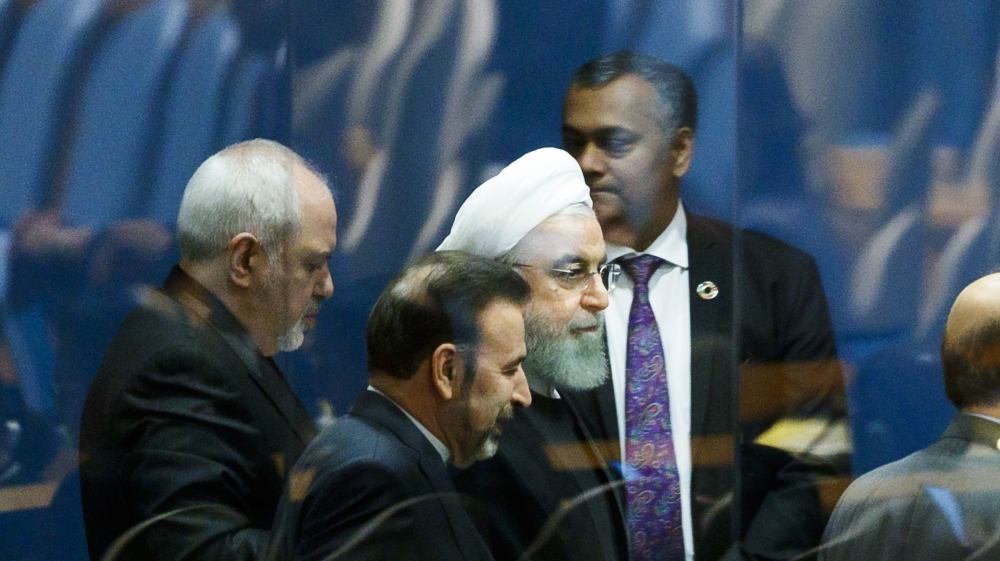 The last time Zarif was at the UN was in September when he accompanied President Hassan Rouhani to the 74th General Assembly meeting [File: Justine Lane/EPA]

The sanctions block any property or interests Zarif has in the US, but he says he has none.

Zarif also attended UN meetings in April and July. During his July visit, Washington imposed tight travel restrictions on Zarif and diplomats at Iran’s mission to the UN, confining them to a small section of New York City.

State Department spokeswoman Morgan Ortagus said in a statement the pair discussed events in the Middle East and that Pompeo “expressed his appreciation” for Guterres’ diplomatic efforts.

EDIT:- It’s about time the United Nations was relocated to Europe.