A Russia-backed government offensive in Syria’s Idlib has brought Turkish forces into direct confrontation with President Bashar Assad’s troops. That threatens to unravel a fragile agreement between Turkey and Russia.

De-escalation talks between representatives of Russia and Turkey have failed to yield any agreement after 13 soldiers were killed over the course of the past week as Syrian President Bashar Assad’s forces continued their efforts to take the strategic M5 highway to Aleppo from rebels for the first time since 2012. By late Tuesday, it remained unclear as to whether the Syrian government’s efforts were successful.

Turkey has sent hundreds of military vehicles and troops to its Idlib outposts in the past week in one of the most serious confrontations between the country and Syria’s government in the nine-year war. Though Turkish President Recep Tayip Erdogan has threatened that Assad’s government will pay “a very heavy price” for the Turkish soldiers killed, he may not want to risk a direct clash with the Russian aircraft and personnel backing the Syrian forces, which could lead to an even more dangerous escalation.

Neither Russia nor Turkey is “prepared to cede either the principal or the ground” in Idlib, Tobias Schneider, a research fellow at the Global Public Policy Institute in Berlin, told DW. “We might see a minor conflagration as we saw in 2015, when the Turks shot down a Russian jet, and then we would see who would back down first,” Schneider said. “That’s the big question now.”

After Russia entered the war with air support for Assad’s forces in 2015, tipping the momentum back in the regime’s favor, Turkey backed some rebel groups carving out sections of Syria’s north in 2016.

But a truce brokered by the governments of Turkey, Russia and Iran in the Astana and Sochi talks now looks to be under threat, with the Kremlin backing Assad’s offensive into areas overseen by Turkey.

That leaves Turkey in a weaker position, Schneider said. Ankara’s disputes with fellow NATO members have reduced the probability that the US or European countries would help re-balance the scales.

The political analyst Mohamad Kawas told DW that the most likely scenario is that a military intervention by Turkey would lead to new talks. “In this way the two parties can reach a balance, a Sochi 2,” Kawas said, referring to the agreement reached in the Russian city in 2018.

Schneider said he believed that Turkey’s beefed-up deployment could be an attempt to reverse some of Assad’s gains in order to stake out a better negotiating position. But, with Turkey’s air force in “disarray,” “fundamentally the question is: Can this hold without a credible threat vis-a-vis the Russians? And whether Turkey is prepared to go that far.”

More likely, Schneider said, is a continuation of the “slow managed collapse” of Idlib as Assad continues to launch periodic smaller campaigns to chip away at rebel-held areas. On Tuesday, the UN Office for the Coordination of Humanitarian Affairs warned that the city of Idlib, home to 280,000 people, could become a graveyard should hostilities continue.

Since December, the offensive has displaced 700,000 civilians within the northern province of 3 million — more than at any other time during the war, according to the UN, with many also facing extreme cold.

Russian jets pound al-Atareb tonight. The town welcomed displaced people from all over Syria. Now its original inhabitants and IDPs have to flee toward the shuttered Turkish border.

Civilians are fleeing al-Atareb on foot tonight towards the locked Turkish border due to intense regime shelling & Russian airstrikes. It is -7C° (19°F) in al-Atarib right now. There are no tents available at the border due to the mass flight of 689,000 people in just 9 weeks. 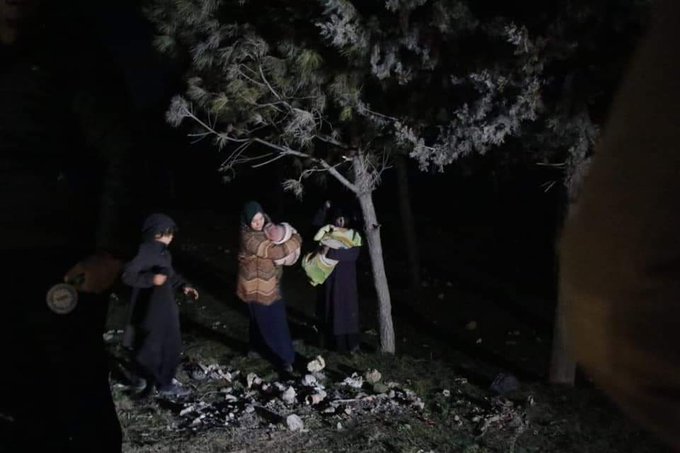 101 people are talking about this

Turkey opposes admitting more people displaced by the civil war in Syria. There are 3.5 million already within the country’s borders.

Erdogan has warned that, should a large number of refugees cross the border, he would allow many to pass onward to the European Union, in contravention of the agreement struck between the EU and Turkey in 2016. In that event the EU would probably renegotiate with Turkey and eventually sanction the country, Schneider said.

“While nobody wants a catastrophe in Idlib, the Europeans really see it as a border security and migration issue, and they are quite confident in their ability to contain that problem,” he said. “They think they can basically resolve this by sending a lot of tents and locking down the border.”